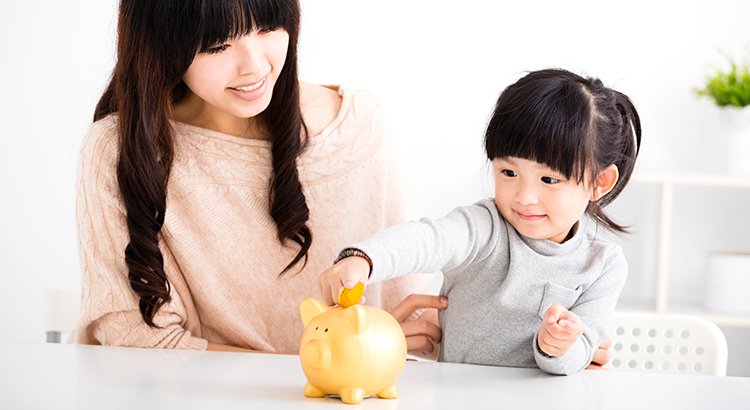 How Your Home’s Value Grows Your Family’s Wealth

Over the next five years, home prices are expected to appreciate 3.64% per year on average and to grow by 18.4% cumulatively, according to Pulsenomics’ most recent Home Price Expectation Survey. 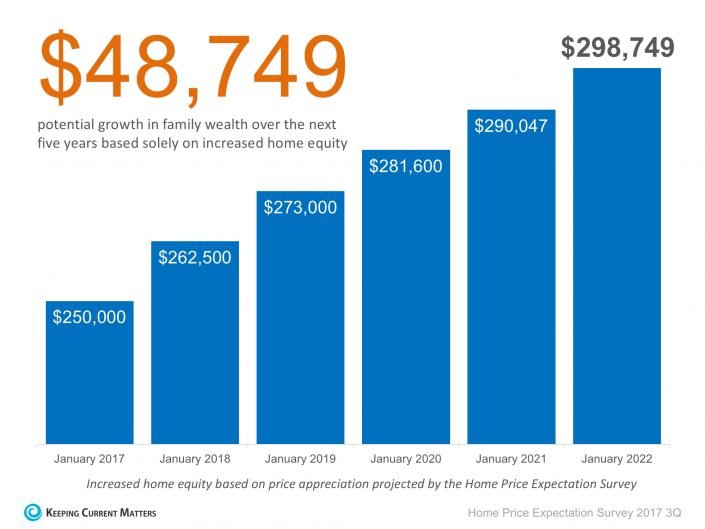 Since the experts predict that home prices will increase by 5.0% this year alone, the young homeowners will have gained $12,500 in equity in just one year.

Over a five-year period, their equity will increase by nearly $49,000! This figure does not even take into account their monthly principal mortgage payments. In many cases, home equity is one of the largest portions of a family’s overall net worth. 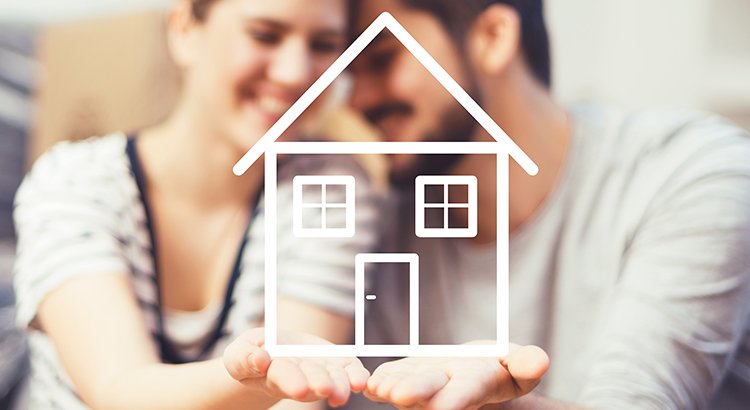 The results of countless studies have shown that potential home buyers, and even current homeowners, have an inflated view of what is really required to qualify for a mortgage in today’s market.

One such study by the Wharton School of Business at the University of Pennsylvania revealed that many millennials have not yet considered purchasing homes simply because they don’t believe they can qualify for a mortgage.

A recent article about millennials by Realtor.com explained that:

The article also explained that 29% of millennials believe their credit scores are too low to buy. The problem here is the fact that they think they will be denied a mortgage is keeping them from even attempting to apply.

Ellie Mae’s Vice President Jonas Moe encouraged buyers to know their options before assuming that they won’t qualify for a mortgage:

“Many potential home buyers are ‘disqualifying’ themselves. You don’t need a 750 FICO® Score and a 20% down payment to buy.”

So, what credit score is necessary?

Below is a breakdown of the FICO® Score distribution of all closed (approved) loans in July from Ellie Mae’s latest Origination Report. 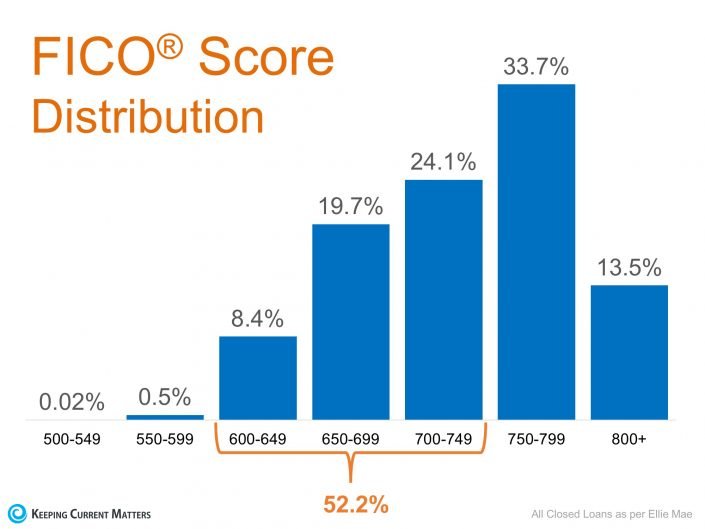 Over 52% of all approved loans had a FICO® Score under 750. Many potential home buyers believe that they need a score over 780 to qualify.

If owning a home of your own has always been your dream and you are ready and willing to buy, or if you are a homeowner who wants to move up, find out if you are able to! Meet with a local real estate professional who can help you determine if your dreams can become a reality sooner than you thought! 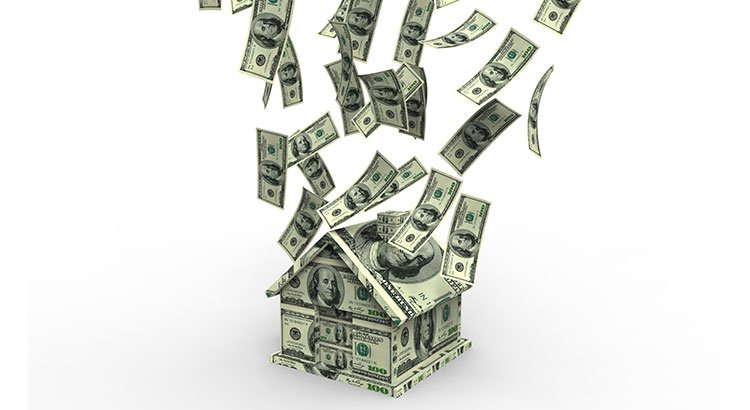 One of the main reasons why For Sale By Owners (FSBOs) don’t use a real estate agent is because they believe they will save the commission an agent charges for getting their house on the market and selling it. A new study by Collateral Analytics, however, reveals that FSBOs don’t actually save anything, and in some cases may be costing themselves more, by not listing with an agent.

In the study, they analyzed home sales in a variety of markets in 2016 and the first half of 2017. The data showed that:

“FSBOs tend to sell for lower prices than comparable home sales, and in many cases below the average differential represented by the prevailing commission rate.” (emphasis added)

Why would FSBOs net less money than if they used an agent?

Three conclusions from the study:

If you are thinking of selling, FSBOing may end up costing you money instead of saving you money.

Agents: For more information like this, that you can share with your sellers, join us this afternoon (2PM EST/11AM PST) for a live webinar when we will discuss, How to Become a Rainmaker for Listing Leads This Fall! 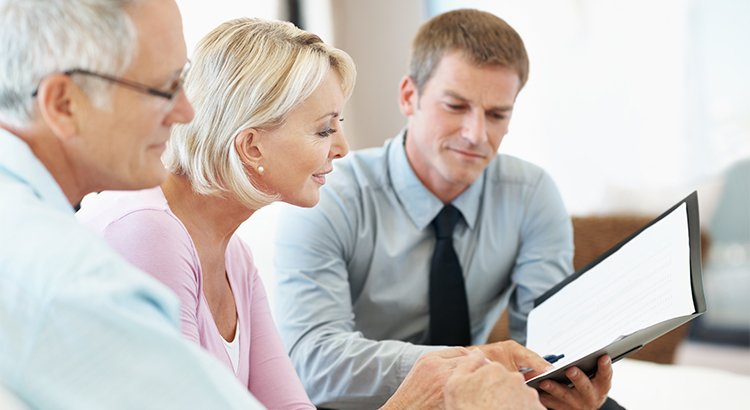 Why Is It Important to Use a Professional to Sell Your Home?

When a homeowner decides to sell their house, they obviously want the best possible price for it with the least amount of hassles along the way. However, for the vast majority of sellers, the most important result is actually getting their homes sold.

In order to accomplish all three goals, a seller should realize the importance of using a real estate professional. We realize that technology has changed the purchaser’s behavior during the home buying process. According to the National Association of Realtors’ 2016 Profile of Home Buyers & Sellers, the first step that “…44% of recent buyers took in the home buying process was to look online at properties for sale.”

The plethora of information now available has resulted in an increase in the percentage of buyers who reach out to real estate professionals to “connect the dots.” This is obvious, as the percentage of overall buyers who have used agents to buy their homes has steadily increased from 69% in 2001.

If you are thinking of selling your home, don’t underestimate the role a real estate professional can play in the process. 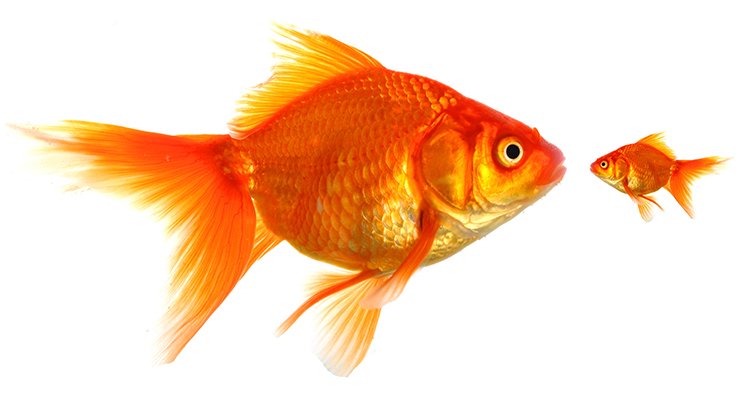 Homeowner’s Net Worth Is Still Greater Than a Renter’s

Every three years, the Federal Reserve conducts their Survey of Consumer Finances in which they collect data across all economic and social groups. The latest survey, which includes data from 2010-2013, reports that a homeowner’s net worth is 36 times greater than that of a renter ($194,500 vs. $5,400).

The latest survey data, covering 2014-2016 will be released later this year. In the meantime, Lawrence Yun, the National Association of Realtors’ Chief Economist estimates that the gap has widened even further, to 45 times greater ($225,000 vs. $5,000)!

Put Your Housing Cost to Work for You

The latest National Housing Pulse Survey from NAR reveals that 84% of consumers believe that purchasing a home is a good financial decision. William E. Brown comments:

“Despite the growing concern over affordable housing, this survey makes it clear that a strong majority still believe in homeownership and aspire to own a home of their own.Building equity, wanting a stable and safe environment, and having the freedom to choose their neighborhood remain the top reasons to own a home.”

If you are interested in finding out if you could put your housing cost to work for you by purchasing a home, meet with a real estate professional in your area who can guide you through the process. 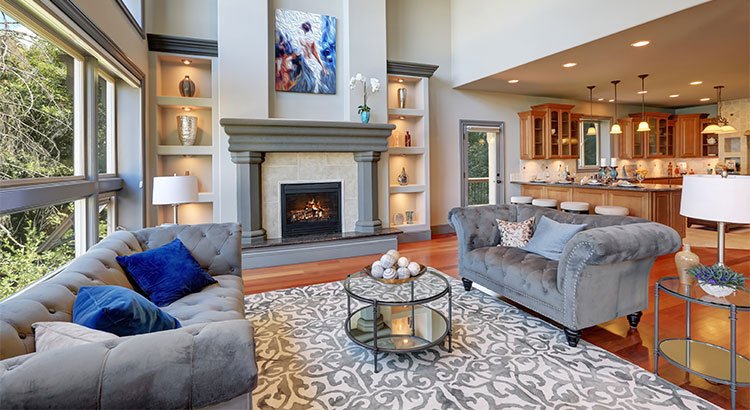 Want to Keep up with the Joneses? Now’s the Time

Does your current house fit your needs? Does it seem like everyone else is moving up and moving on to more luxurious surroundings? Are you wondering what it would take to start living your dream life?

Market conditions around the country have presented an opportunity like no other for those who are looking to make the jump to a premium or luxury home.

The National Association of Realtors reports that national inventory levels are now at a 4.3-month supply. A normal market, where prices appreciate with inflation, has 6-7-months inventory. The national market has echoed the conditions felt in the starter and trade-up markets as inventory has declined year-over-year for 25 consecutive months.

The chart below shows the relationship between the inventory of homes for sale and prices. 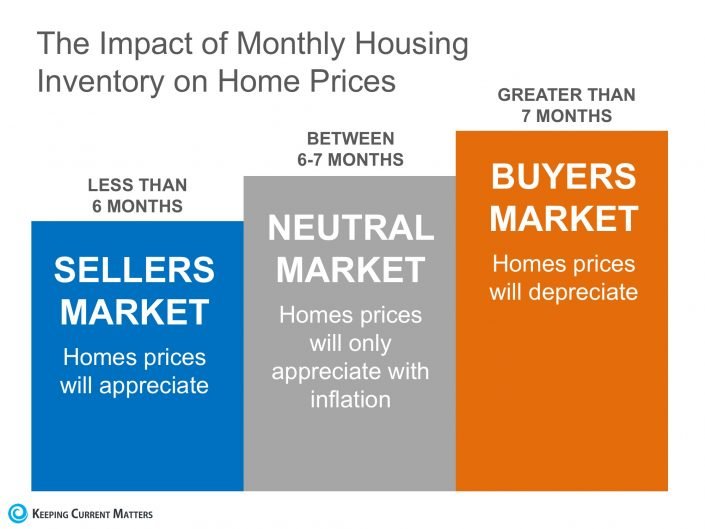 If you are even thinking of listing your home and moving up to a luxury home, now is the time to meet with a local real estate professional to evaluate your ability to do so. Homeowners across the country are upgrading their homes, why can’t you? Your dream home is waiting! 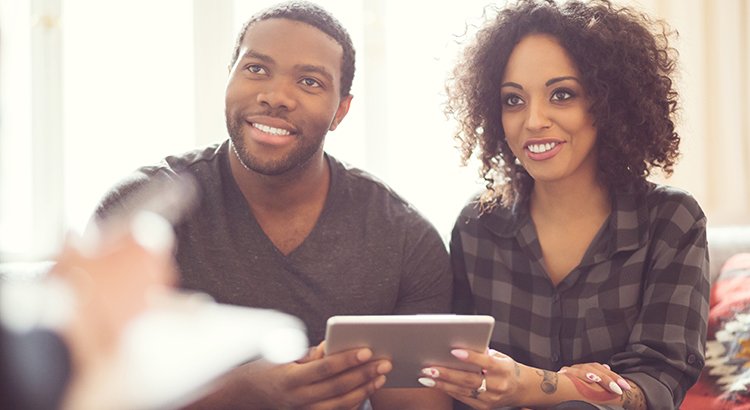 93.9% Of Homes In The US Have Positive Equity

CoreLogic’s latest Equity Report revealed that ninety-one thousand residential properties regained equity in Q1 2017. The outlook for 2017 remains positive as well, as an additional 600 thousand properties will regain equity if home prices rise another 5% this year.

The study also revealed that:

Below is a map showing the percentage of homes with a mortgage, in each state, that have positive equity. (The states in gray have insufficient data to report.) 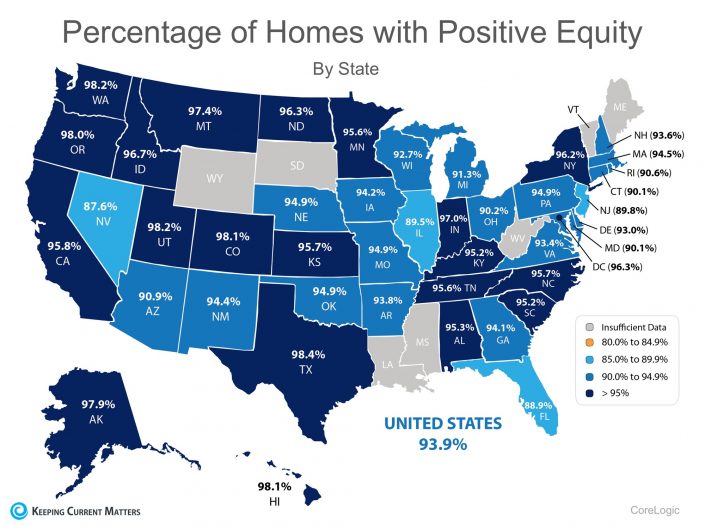 Significant Equity Is On The Rise

Frank Martell, President & CEO of CoreLogic, believes this is great news for the “long-term health of the U.S. economy.” He went on to say:

“Homeowner equity increased by $766 billion over the last year, the largest increase since Q2 2014. The rising cushion of home equity is one of the main drivers of improved mortgage performance. Since home equity is the largest source of homeowner wealth, the increase in home equity also supports consumer balance sheets, spending and the broader economy.”

The map below shows the percentage of homes with a mortgage, in each state, that have significant equity. (The states in gray have insufficient data to report.) 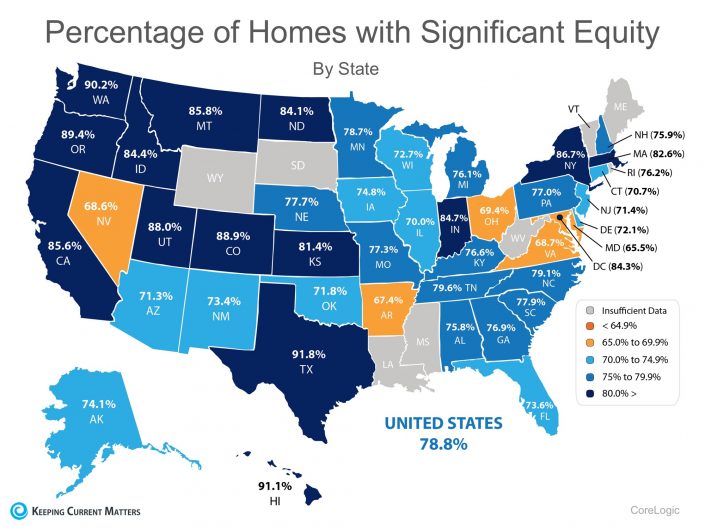 If you are one of the many homeowners who are unsure of how much equity they have in their homes and are curious about their ability to move, meet with a local real estate professional who can help evaluate your situation. 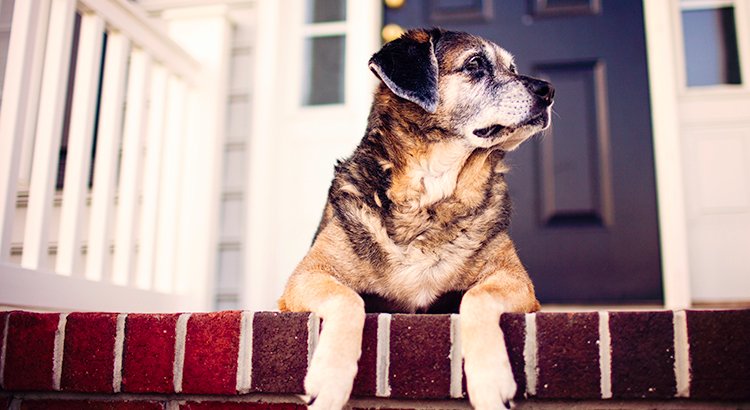 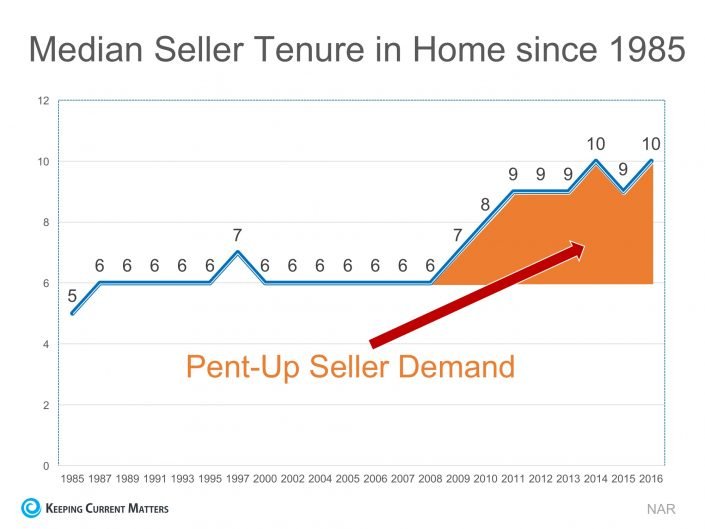